This is my second article related to Sam Harris’ Waking Up podcast #124, a discussion with physicist Sean Carroll, about reality, physics, freewill, and a whole bunch of stuff in between. In this article I want to critically examine the tendency among physicists these days to base their understanding of reality on mathematical models they construct about that reality.

The Many Worlds Interpretation of Quantum Mechanics

The many worlds interpretation, first suggested by Hugh Everett in 1957, is an attempt to make some sense of the quantum mechanical assertion that unmeasured, or unobserved, quantum systems don’t actually exist in any particular state. Rather, they exist in multiple possible states at the same time and it is only once the system is measured, or observed, that one of those possibilities becomes actual. The many worlds interpretation holds that, at the moment of measurement, rather than one of these possibilities becoming actual, the universe splits into multiple branches, so that each possibility actually actualises, just in different universes.

The classic example is Schrodinger’s cat. The cat is in a box with a gun pointed at it and the trigger is connected to some radioactive substance in such a way that if a part of it decays, the gun will fire, killing the cat. Since we can’t predict when certain parts of the substance will decay, we don’t know whether the cat has already been killed or not. But quantum mechanics tells us that since the system is unmeasured, in actuality the cat is both alive and dead. If we open the lid to check and see that the cat is still alive, the alternative possibility, the cat being dead, doesn’t just disappear; rather, another universe, in which everything is identical except that the cat is dead, branches off from this one.

Now, if this doesn’t strike you as the most extravagant, outrageous, supremely unlikely scenario anyone has ever insulted your intelligence with, you are either extremely gullible or you haven’t understood it. Think about how many millions of open possibilities become decided one way or the other every second of every day – that is how many universes, not atoms or molecules, universes(!), are springing into existence all the time. And that is just considering our planet in our universe. Now think about all of the open possibilities being decided and sprouting new universes from all of these other universes every second of every day! I can’t help but imagine God labouring hard for his six days to build just one and standing back proudly once he finishes, meanwhile he’s been surrounded by a sea of trillions upon trillions of universes for about five and a half days. 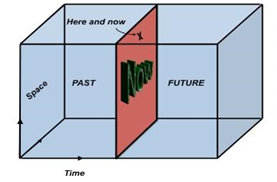 The block universe theory is a theory about time. What it does is postulate that we live in a block of space-time. One slice of this block is one moment. One of these slices is the ‘now’ slice, i.e. the one we are all experiencing at the present, but the slices behind (the past) and those in front (the future) still/already exist as well. Past, present, and future all exist at the same time (no pun intended). Our sense that time is flowing is nothing more than us moving through this block of space-time.

Again, Carroll defends this, apparently crazy, understanding of time as just the way time looks in the mathematical equations. Time is a letter ‘t’, and “yesterday, today, and tomorrow; they’re just different numbers on a line”.[2] If we take the equations seriously, and we should, this is the picture of time they present us with.

This is the position Carroll is defending. If the equations tell us trillions of universes are springing into existence at every moment, that’s just what is happening. If the variable “t” (which represents time in physics equations) can be eliminated, then obviously time doesn’t exist (to be fair, Carroll doesn’t make this claim on the podcast – I saw it in an episode of Through the Wormhole – but it aligns with this whole ‘take the equations seriously’ attitude). If a conceptual model for the universe we have derived from the equations says past, present, and future are all present in a block, then they are.

The only reason I question the wisdom of throwing common sense out the window and blindly trusting the mathematics is the well-known logical fallacy; mistaking the map for the territory. Nobody doubts the effectiveness of physics to construct truly remarkable models and mathematical equations which allow us to predict, manipulate, and control physical reality to a degree unprecedented in human history, but these models are not the territory. In saying, “yesterday, today, and tomorrow; they are just different numbers on a line”, Carroll is explicitly and unashamedly making this logical fallacy. Time is most definitely not numbers on a line. Anybody who thinks this has clearly never been late for the bus or sat down to an exam knowing three hours of solid writing lay ahead of them. Of course, time can be represented by numbers on a line, but the difference between these two propositions, one that seems to have been forgotten by most modern physicists, is immense.

There are two particularly revealing examples I can think of off the top of my head (although there are certainly others) which illustrate how inadequate our models are as literal descriptions of reality; both involving quarks. Quarks come in six ‘flavours’, up, down, top, bottom, strange, and charm. The up and down quarks have ‘respectable’ properties like an electric charge and mass, but the others also have other ‘properties’ that correspond to their names, so the charm quark has a ‘charm value’ of 1, and the strange quark has ‘strangeness’ of -1. What on earth do these numbers mean, in reality? No one knows. In truth, they don’t mean anything. They are mathematical contrivances that make our theories work. We know, for example, that strangeness must be conserved and that a kaon is composed of a strange quark bound with an up or down anti-quark, but this tells us nothing about what strangeness is actually supposed to be. Of course, the model which includes all these ‘properties’ allows physicists to make sense of experimental data, predict experimental results, and construct theories about particle behaviour at the quantum level… but it does all of this without concerning itself about what reality is really like down there.

The second example comes from the theory of the strong interaction between quarks and gluons, quantum chromodynamics (QCD), which assigns three additional ‘charges’ to quarks, called ‘red’, ‘blue’, and ‘green’ (the naming of which obviously has nothing to do with actual colours). As with the six ‘flavours’, while the colours are useful in the mathematical models, they don’t tell us anything about reality, but in the case of colour it’s even worse because the three differently ‘coloured’ quarks are indistinguishable from each other. All three are literally supposed to be identical! As far as I’m aware, the ‘invention’ of colour is a purely theoretical device used to stop quarks from violating something called the Pauli exclusion principle. Forget the map not being the territory. In this case, it adds things that aren’t even in the territory!

The many worlds interpretation is just so outrageous and quite honestly, offensive, to reason and common sense, that for a physicist to write this off by saying we have to believe it because that’s what the equations say, just isn’t good enough. Physicists typically defend the counter-intuitive nature of these claims by appealing to the idea that, given the fact we are creatures who evolved solely for survival, the miracle would be if the reality fundamental physics seeks to describe actually did conform to our intuitions and experiences. Fair enough. Look, I’m prepared to tentatively assent to a lot of bizarre things for now; entanglement, superposition, different ‘flavoured’ quarks (even if we don’t know what the ‘flavours’ mean), ten dimensions, etc., especially when there is solid experimental evidence to back them up, which there often is (barring perhaps the extra dimensions). And even if they turn out to be wrong, which they might be (science isn’t in the business of making infallible pronouncements (or so scientists used to say in their more humble days)), I happily assent to the fact that there’s something very weird going on down there and much more for us to uncover besides. But for something as wildly implausible as a veritable infinity of universes springing into existence every moment, you need to do more than point to a mathematical model and tell me I ought not to be surprised that reality doesn’t conform to my expectations.

Irrespective of what the mathematics says, the block universe claim that past, present, and future all still/already exist completely fails to explain time, precisely because time is a phenomenon which is fundamentally experiential. To say our experience of time is an illusion, and think you’ve said something meaningful, is about as useful as comforting someone shivering in the cold by saying temperature is an illusion; i.e. it’s just atoms moving about slowly. I’m still cold, my future still hasn’t happened, and my past has already gone. Try again.

The idea that time is just another dimension we are moving through, fixed and unchanging like the three spatial dimensions, is, as with the many worlds interpretation, so counter-intuitive and contrary to experience that you need a pretty convincing argument to sell it. ‘Because the math says so’ doesn’t qualify, especially when at other times the math is just math (e.g. the ‘colour’ charge of quarks).

Let me just emphasise that I am not arguing the theories are wrong. Not am I arguing we would be better off without them. All I’m saying is the map is not the territory. I am not even suggesting that the map can’t tell us something useful, even things we didn’t know before, about the territory. There have been many instances where theory has allowed physicists to predict both particles (e.g. neutrinos and, more recently, the Higgs boson) and real-world effects (e.g. Einstein predicting that light would bend around massive objects and flow at different rates relative to velocity), but it still doesn’t follow from any of this that because the “t” which represents time in an equation can be eliminated, time doesn’t exist. As useful and as practically informative as our theories are, they will always only be models of the real world, which means they will come with the limitations all models inherently come with. We have now reached a point where physicists are arguing that the world is a certain way because their models are a certain way. Whether the physicists turn out to be right or wrong, the argument from the map to the territory just isn’t the right way to get there.

3 thoughts on “In Search of Reality – Trust the Maths”