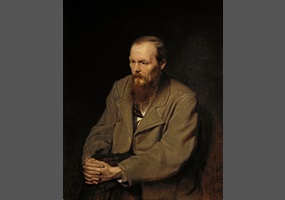 In Dostoyevsky’s classic, The Brothers Karamazov, Ivan Karamazov, the Russian author’s symbol for the scientific, rational, Western outlook, wrestles with the problem in the title of this article; without God, everything is permitted. Since then, this proposition has been used in countless discussions to justify belief in (typically the Christian) God. At least a part of its appeal for the religiously inclined lies in the near instant assent it tends to evoke. If there is no God, and therefore no higher Authority to dictate to us what our ethical rights and obligations are, how can we have any? We need God to ground morality. In this article, I will challenge this claim.

There are actually two ways Dostoyevsky’s line can be understood, and it’s important that we separate these out because they carry us into very different territories. The first and stronger of the two interprets it as an argument for the existence of God and runs something like this: Without God, everything is permitted. Since everything can’t be permitted, God must exist.

The problem, of course, is that everything could very well be permitted. This means that the argument gets its force from the fact that we don’t want it to be the case that everything is permitted. I mean, wouldn’t it be so unjust if everything were permitted? How could the universe be like that? At this point, we realise that this attempted proof, rather than being an argument, is actually an instance of special pleading, which therefore cannot be a reason for or against anything.

The second, weaker interpretation doesn’t necessarily try to prove the existence of God but still tries to take advantage of the ethical implications of God’s existence. This can best be captured with the following formulation: Without (belief in) God, everything is permitted. Therefore, if we want any morality at all, we need (belief in) God.

There are two ideas buried in this interpretation. The first is that without some ultimate, transcendental Authority, morality somehow lacks meaning. Everything is permitted because morality has no ground. This is just not the case. Without God, morality may not have a transcendent ground, but there is absolutely no reason why it can’t have an immanent one; i.e. why we can’t ground our own morality. We are the ones who are going to live by it, after all. Morality is just a code of conduct we all agree to live by; a code based on a set of values we can agree on. We can argue about whether it would be better for a transcendental Creator God who knows much more than us to just tell us what to do (some of our ethical decisions in the past have left quite a bit to be desired after all; we need look no further than our very own Bible for plenty of examples of this), or for us to actually think about it and take some responsibility for our own choices, but whether (belief in) God exists or not, our morality is just as meaningful either way.

One might argue that this would render morality completely arbitrary. This just isn’t true. We don’t formulate our morality arbitrarily; i.e. on a whim or without reason. On the contrary, we think deeply about, argue for, provide evidence in support of, and (if we’re at all enlightened) encourage reasoned debate, about our moral principles. We tweak them when we believe they need tweaking and throw some of them out completely and start again when that is what is required. Are we flying by the seat of our pants? Absolutely. Is this difficult, in the sense that we actually have to think for ourselves and be responsible for our own decisions? Definitely. Is it messy, in the sense that different cultures (or even segments within the same culture) may end up clashing over different moral systems? Totally. Is the process therefore arbitrary and meaningless? Absolutely not. If anything, as Simone de Beauvoir says, God’s absence, rather than authorising all license, means that we alone bear the “responsibility for a world which is not the work of a strange power, but of [ourselves]”. What could be less arbitrary and more meaningful than this?

The second idea is that without an ultimate, transcendental Judge, there are no ultimate, transcendental consequences for failing to live by the agreed-on moral code. Everything is permitted because there are no serious punishments. It is, of course, true that without God, there are no supernatural or post-worldly consequences, but there most definitely are punishments, which means, by definition, that everything is explicitly not permitted. Whether those punishments take place through the justice system, or are more socially mediated (shame, exclusion from the group, etc.), these punishments absolutely do exist for violating moral strictures, and absolutely do forbid the breaking of those moral rules.

One might object that such ‘earthly’ punishments are too easily circumvented, or lack the gravitas of a supernatural Will (Biggest Brother, if you will), watching and tallying our every misdeed. This is surely true, but as with the ultimate, transcendent Authority above, the argument that it would be better for a transcendental Creator God to back up our moral rules with some heavy-duty punishments, is quite different from the discussion we are having here. Either way, punishments (which do work) exist here and now – i.e. not in some post-world existence – with the explicit and immediate goal of preventing wrongdoing, and this means that without (belief in) God, everything most definitely is not permitted.

The objection here is that, while everything is still permitted, as in able to be done here in the earthly realm, everything is not permitted, in the sense that God has decreed some things impermissible, and will punish miscreants in the afterlife. Well, while that is a beautiful sentiment regarding our all-loving God, it doesn’t change much for us mortal beings down here on Earth. Bad behaviour, while (allegedly) having been prohibited by a higher power, is still permitted because that same higher power does nothing to prevent it. Punishment after the fact is not the same as not permitting the crime to take place in the first place.

This is where I would also address an objection which more properly belongs in the preceding section, and one I remember hearing William Lane Craig make; if there is no God, the entirety of a mortal, earthly morality can be overcome with a single word; No. No; I reject your premises, I disagree with your reasoning, I dispute your arguments. The reason I left this objection to now is because it is true; anybody can take issue with any specific ethical rule or injunction, and indeed, anyone can simply refuse any ethical precept without any reason whatsoever. However, it is also true that even regarding a morality grounded in the authority of a Creator God, and backed up by the promise of eternal, post-life torture, a simple ‘No’ dispenses with the whole edifice. Indeed, is this not what Christians say in the face of Islamic divine commandments or Hindu ethical dogma? Is it not what modern Christians would say even in the face of Medieval ethical tenets espoused by an earlier incarnation of their own God? The truth is no morality, whatever you ground it in, however terrible the punishment, however blissful the reward, will ever be immune to a simple ‘No’. If it weren’t, morality would cease to be, because we would all be automatons mindlessly doing what we had been ‘programmed’ to do.

Without What Then, is Everything Permitted?

We have seen that with or without (belief in) God, everything is still permitted, but surely this need not be the end of the discussion. While prefacing the clause ‘everything is permitted’ with something related to God failed to yield a valid proposition, we don’t have to think that hard to find something that will do the job.

Without compassion, without good old-fashioned human decency, everything is permitted.

This non-religious formulation succeeds where the God-centred one failed because it turns the focus of the proposition inwards, making it subjective (in the Kierkegaardian sense of the word), pressing it upon the individual in his or her core, rather than looking outwards for justification in an external authority figure. With compassion, no human being could ever harm another human being. If they could, they would be demonstrating their lack of compassion. On the other hand, without compassion, truly anything is permitted, irrespective of whether the individual in question happens to believe in a God or not. Would it amount to a perversion of the faith if terrible things were done in the name of God? Perhaps. But this doesn’t change the fact that terrible things have been, are being, and will be, done in the name of God as long as Gods exist. With or without God, everything is permitted.

The objection will still be made that compassion just isn’t strong enough to ground an effective morality on. How can this influence the behaviour of the person who says, “Screw your compassion. I’m taking your stuff because I want it”? Of course, it can’t. But, as we’ve seen, appeal to an external Law-Giver isn’t immune to such rejection either. The believer has exactly the same problem when the villainous individual says, “Screw your religious mumbo jumbo. I’m taking your stuff because I want it.” What’s even worse is he or she doesn’t have to reject belief in God to reject the morality of the believer. History is full of Christians doing things which were obviously wrong, and which they nevertheless justified to themselves anyway. Not only that, the appeal to this God has no hold over someone who believes in that God.

Compassion and human decency rise above these petty concerns, revealing them as vacuous and completely unable to ground any morality deserving of the name. Morality can never be grounded in super-human myths and fantasies. If we want a morality, it can only be grounded in something that unites us as human beings, and such a thing will never be a belief or proposition about something external to us. The truth is, a morality that doesn’t turn inwards and ground itself in the imperfect, flawed creatures who live according to it, just isn’t a morality at all.

14 thoughts on “Without God Everything is Permitted”