What is the nothing? Can we even talk about nothing meaningfully, or does the very act of making ‘nothing’ the subject of a discussion turn it into something? In this article, I take up the question of the nothing through the eyes of three philosophers (one is not Hegel, although he would have been a natural inclusion – Hegel is still a glaring blind spot in my philosophical knowledge), and one religion. All of the approaches to nothingness I look at (bar the very last one), despite being quite different and often reaching different conclusions, are equally valid, and rather than clashing in an either/or merge quite satisfyingly in a both/and.

END_OF_DOCUMENT_TOKEN_TO_BE_REPLACED

This article is about Sam Harris’ 127th Waking Up podcast in which he talks with Michael Pollan about his latest book, How to Change Your Mind, a New York Times bestseller that investigates the revolution now taking place regarding psychedelic drugs. On the podcast, Harris and Pollan discuss the psychological benefits of psychedelic drug use for those suffering from conditions like depression, addiction, etc., and the general benefits of its use for otherwise healthy people.

Note: I haven’t read the book, so my comments are restricted to what is discussed on the podcast. I also won’t be discussing potential societal/health problems regarding making psychedelics legally available to the public.

Claim 1: The main benefit Pollan and Harris focused on regarding the use of psychedelics among otherwise healthy people was their ability to distance one from the (illusory) self. Pollan talks about the drugs dissolving his sense of self, which was freeing in the sense that it gave him an alternative “way to be”, another way to react to what happens in his life. He realised he doesn’t have to listen to his ego all the time. Of course, being an experience, it fades with time and, as he recounts, shortly afterwards, his ego was back in full force. Nevertheless, the alleged benefit was that it had given him a glimpse of another way to live, a way that can be developed more robustly through meditation.

END_OF_DOCUMENT_TOKEN_TO_BE_REPLACED

Sartre, in the opening chapter of his very challenging read, Being and Nothingness, cleaves existence neatly in two; what he calls being-for-itself and being-in-itself.

The in-itself is being. I don’t recall Sartre ever explicitly describing it as physical matter, but that is basically what it amounts to. The in-itself is characterised by three features: 1) it is in-itself, 2) it is what it is, and 3) it is. Respectively, these mean: 1) the in-itself is independent; i.e. it doesn’t depend on anything else to exist, 2) it doesn’t refer to itself; i.e. it isn’t self-reflexive, and 3) it is neither possible nor necessary. It isn’t necessary because it didn’t have to be, but neither is it possible because inert, non-conscious matter has no possibilities.

The for-itself, on the other hand, is consciousness. What does this mean? Consciousness is precisely not being. It is an empty, ‘massless’[1] perspective on, or relation to, being. The for-itself cannot be grasped because it is not a being, it’s not a thing, it is precisely no-thing… which is not the same as saying it is an illusion or that it doesn’t exist at all. If you find this scientifically implausible, I challenge you to describe consciousness in a way that preserves what conscious clearly is, all while staying within the confines of naturalistic materialism.

END_OF_DOCUMENT_TOKEN_TO_BE_REPLACED 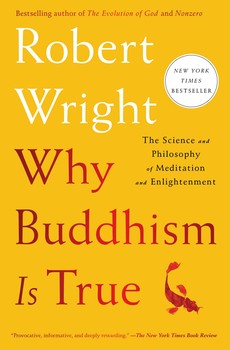 Robert Wright’s book, Why Buddhism is True, is the latest in a growing number of works authored by prominent Western intellectuals promoting a Buddhism stripped of supernatural trappings and recommending meditation. I support both of these causes. As I’ve remarked elsewhere, I think Buddhism is the only ‘religion’ which still makes sense when considered apart from its supernatural elements, and when so considered, no longer even qualifies as a religion. Meditation is also a worthwhile venture with many practical benefits, especially when the mystical and new age dimensions have been pruned.

Although the initial premises as I have outlined them above are beneficial and ‘true’, in my opinion the central themes of Why Buddhism is True are less so. As the title suggests, Wright’s central argument is that Buddhism provides the tools which allow us to pierce the illusions our naturally selected brains create for us, see things as they really are, and thereby, alleviate suffering. I will argue against this. But before going on the offensive it is definitely worth dwelling on what is good about WBIT.

END_OF_DOCUMENT_TOKEN_TO_BE_REPLACED

I have been fairly generous to Buddhism in my writings thus far, for good reason I think, but there are some problems with Buddhism which the book, Siddhartha, by Hermann Hesse, has helpfully given me scope to address. In this article, I will examine the way the self and enlightenment are presented in Siddhartha and offer a critical discussion of Buddhist attitudes towards, and interpretations of, both.

END_OF_DOCUMENT_TOKEN_TO_BE_REPLACED

This is an abridged version of the full article which can be found on the Absurd Being website here.

Most religions don’t fare well under either question. Consider Christianity. Removing the notions of God, heaven and salvation leaves pretty much nothing behind. You might argue that we can shunt the supernatural aside in which case Christianity will be all about community; strengthening social bonds, loving thy neighbour, etc. Possibly. But in that case, how is Christianity different from secular humanism which attempts to ground modern values and ideals on reason rather than the supernatural crutches religions rely on? Specifically, where would Christianity’s authority come from if we reject the ideas of God and eternal salvation? Bottom line: in the case of Christianity (and most other religions), you can’t throw out the bathwater without also throwing out the baby. END_OF_DOCUMENT_TOKEN_TO_BE_REPLACED